Certified Utility Safety Professional – The Defining Benchmark
If you have dedicated your career to providing safety and operations leadership in the utility industry, now is the time to enhance your professional status with the CUSP certification. Join a distinguished group of hundreds of individuals who have demonstrated their job safety knowledge.
The Certified Utility Safety Professional certification program is the only program that offers safety credentials to utilities, related contractors and communication providers. It is designed to provide a career path and individual growth for employees and increased value for employers.
In partnership, employers and employees promote a culture where safe utility work practices are the standard. 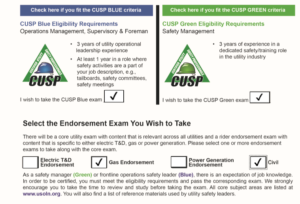 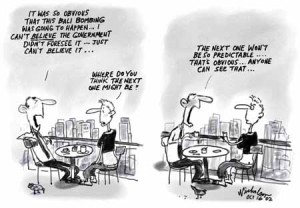 Before Day’s End; this tremendous safety documentary has a personal connection to some of us at Xi Safety Inc and one of the injured workers.

TORONTO, Aug. 20, 2012 /CNW/ – 25,000 accidents are reported each year in the construction industry. Many of these are life-changing or even life-taking events. Before Day’s End, a new documentary film commissioned by CLAC, provides deeply emotional first-hand accounts from victims and family members, chronicling the details of five separate accidents and their devastating aftermath.

“I never had a meaningful conversation with him after that day,” says a father whose son was pinned and suffocated by a malfunctioning lift, leading to a coma, and eventually, death. “There was a point in time where I guess my prayers might have turned from ‘Let’s get him back’ to ‘Let’s let him go.’

“I can’t take that day back, I cannot reverse time”, says a young man who was seriously injured on a job site.

As the film progresses, its message becomes clear: There is much in our lives and our work that we take for granted. This poignant documentary helps its viewers become conscious not only of daily blessings, but of the importance of following safety precautions and of exercising care when working.

CLAC is an independent Canadian labour union representing over 50,000 workers in a wide range of sectors―construction, health care, service, transportation, manufacturing, and others. Based on principles that promote the values of respect, dignity, fairness, and integrity, CLAC’s approach to labour relations stresses membership advocacy, cooperation, and the long term interests of the workplace community.  CLAC Training is committed to supporting the overall health and safety of our members by providing courses that are in high demand in Canada’s rapidly changing workplace.

In today’s marketplace and economy many companies are faced with challenges.  In discussion with many in the industry we are hearing that clients are looking at deploying capital strategically to mitigate downside risks, control costs and remain competitive in a tight margin market, yet still deliver and maintain positive results.

We are a Licensed Recruitment Agency:  When you need temporary personnel for any short term work, Xi looks after ensuring your are receiving a vetted professional from our candidate databank. We understand your challenges in obtaining the right candidate.  We look after the rest, including payroll.

IF YOU HAVE SOME IMMEDIATE CHALLENGES WITHIN YOUR ORGANIZATION, TAP OUR EXPERTISE TO ATTAIN DELIVERABLE AND REAL TIME SOLUTIONS.  WE CAN HELP.

“no job is so important, no task so critical, that time cannot be taken to do it safely and in an environmentally responsible manner.”