What does the “Carbon Bubble” Mean for Oilfield Services? 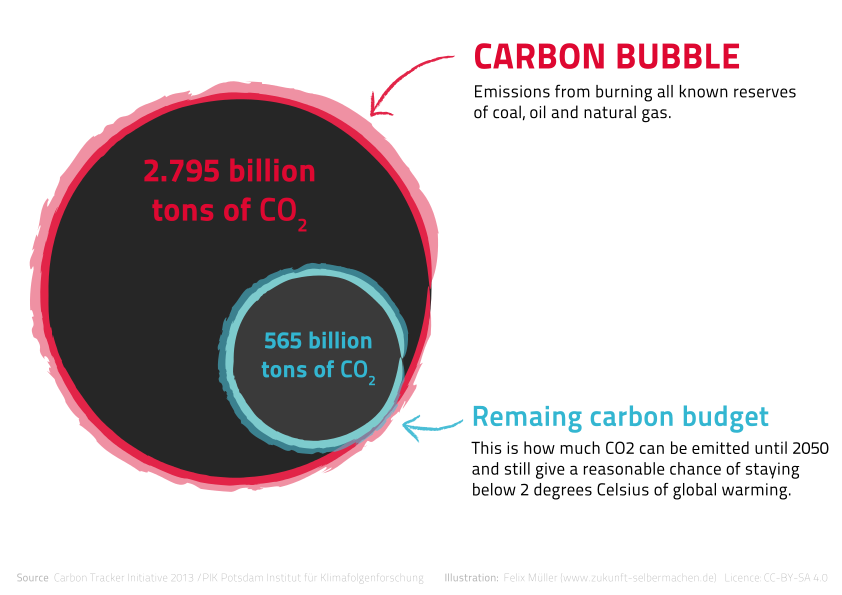 A group of climate scientists got together and decided that humanity is facing a “carbon budget”. This is not a joke. In order to keep the atmospheric concentrations of CO2 below 350 ppm, they say we will only be able to burn 20% of known hydrocarbons, leaving the remaining 80% in the ground. Anything above 350 ppm could lead to a global temperature rise of 2 degrees C, which is associated with mass flooding of coastal areas, along with some “point of no return” scenarios related to methane releases. Since oil and gas companies derive much of their value based on production, prices and remaining future production, some analysts believe the global oil and gas industry is overvalued to the tune of $28 trillion.

It doesn’t matter whether you believe this is real. What matters is if a critical mass of individuals, investors and institutions believe in the validity of this idea. It’s a daft idea, because it take former assets (hydrocarbons) and turns them into potential liabilities (carbon emissions). It’s sprouting new “carbon free” investment portfolios for investors who have ethical viewpoints regarding carbon, or for investors who believe that governments will coordinate a global effort to stamp out carbon emissions.

If we follow this idea through to its main conclusion, it has several implications:

1. We should transition to a carbon-free economy sooner than later
2. High Carbon = High Cost, meaning coal will be the first to go, followed by oil sands, leaving natural gas as the remaining survivor
3. The transition will not be immediate, but will take 30-50 years to switch over to a lower carbon or carbon free economy
4. Developing the infrastructure to transport “green” energy will run into its own set of constraints
5. Formerly abundant resources will become increasingly scarce, regardless of the type of economy we pursue

In this scenario, there is a global, concerted effort to “stamp out carbon” from the energy supply chain. This could be done through various cap and trade schemes, or a global carbon tax on emissions. If tomorrow, we simply awoke to this new world, what would the transition look like for various oilfield services in Alberta, and perhaps the world over?

What the market wants, the market gets, and it’s up to suppliers to meet demand. If the market is suddenly demanding a carbon-reduced supply chain, we might see some or all of the following:

– Emissions Audits – Companies will probably have to prove they are adopting some sort of emissions target. In many ways, this is already occurring, but will only become more prevalent. This creates demand for emissions measurement and estimation coming from owner operators, who would want similar data from their contractors and suppliers. You could picture something like a safety audit -an external audit every three years to examine your EMP, or Emissions Management Plan.

– New Hazards associated with Lithium – “Going green” requires a lot of lithium. This mineral needs to be mined, processed and sold like any other resource. However, its prevalence in the workplace will explode. Unfortunately, so will lithium fires and worker exposure to lithium.

– Geological and Seismic Exploration – Lithium is just like any resource in that it has recoverable and probable reserves, and to expand those reserves, you need to explore. It’s possible that the world could come knocking at Alberta’s door to recruit our expertise at locating resources. I don’t know if the techniques are the same for lithium and oil, but it’s possible.

– Abandoned Wells – It may be possible to re-enter old wells, not for their remaining residue, but to circulate glycol or water to recover subsurface heat and convert it to electricity. However, this electricity could be “stranded” with no means of connecting the supply to the grid. The only way to do it would be to exploit existing infrastructure by running cables through the abandoned pipeline.

– Geothermal Drilling – Many drilling rigs could be put to use for drilling geothermal wells in BC and Western Alberta. This would have implications for drilling rig design, favoring rigs with smaller footprints and lower noise levels for work close to dwellings.

2. Phase Out of Coal

This is already underway. As oil sands plants expand, each new natural gas steam cogeneration unit supplies excess electricity to the grid. Think about this in terms of the carbon chain: heavier crudes will cost more to exploit, while lighter crudes would be subject to less carbon tax. 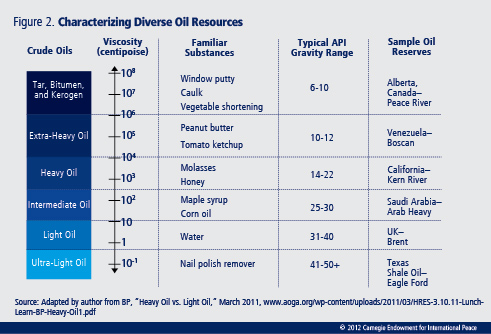 As far as drilling activity is concerned, moving towards a carbon free economy would decrease demand in the oil sands, while driving demand for lighter hydrocarbons such as natural gas and condensates. As a result, the price of natural gas would climb, making new natgas and LNG projects more profitable. This is good news if you’re involved in exploiting some of Western Canada’s natural gas fields such as the Duvernay in Alberta and the Horn River in BC, or if you are servicing companies involved with the LNG game. In a way, a carbon tax on heavier hydrocarbons would launch a boom in BC and Western Alberta. The amount of investment slated for the Duvernay is already in the tens of billions of dollars, and drilling activity from Fort Liard to Rocky Mountain House would likely explode. These towns would become Little Fort McMurrays, enduring similar project related impacts associated with population growth and an influx of workers.

3. Transition Through Retrofits and Global Opportunities

The transition to a reduced carbon economy would not happen overnight, but would take a generation or so to complete. This would require service companies experienced with retrofitting diesel engines to a natgas/diesel blend. The thousands of Caterpillar diesel generators across western Canada would need to be outfitted to run on alternate fuels. We might even see more natural gas at our gas stations. The increased use of natural gas as a workplace fuel will present a new set of hazards, as it is more volatile than diesel, and we could see some massive industrial explosions.

The winding down of oilsands in a carbon constrained world is not a foregone conclusion. Depending on a producer’s cost curve, they may be able to absorb the costs of Carbon Capture and Storage. Incumbents such as Suncor and Syncrude are the most likely to be able to do this, while higher cost producers would struggle. It all depends on their supply costs relative to the price of Western Canadian Select. This would open up new opportunities in salt cavern drilling, Enhanced Oil Recover (EOR) using CO2 injection, and the conversion of existing pipeline infrastructure to CO2 pipelines to transport the product to its disposal site.

Global opportunities would also open up for suppliers for one simple reason: flaring. Nigeria and Russia are behind the technological curve when it comes to dealing with flared gas. These emissions are currently regulated in Alberta through Directive 60, and are regarded as world-class. If other jurisdictions implemented the same regulatory regime, it would raise their costs, making them less competitive. 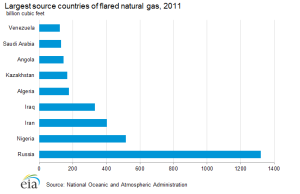 In Russia, natural gas associated with oil production is often flared. According to the U.S. National Oceanic and Atmospheric Administration, Russia flared an estimated 1,320 Bcf of natural gas in 2011, the most of any country. At this level, Russia alone accounted for about 27% of the total volume of gas flared globally in 2011. Although a number of Russian government initiatives and policies have set reduction targets for gas flared, thus far, decreases in gas flared have not occurred.

Currently, these high flaring nations enjoy a cost advantage that Alberta based producers do not enjoy, and implementing a regulatory regime similar to Alberta’s would drive global demand for service companies who know how to build this infrastructure.

Some days it seems that there is a certain amount of schadenfreude when it comes to “green” ideas. People envision hundrends of thousands of laid off oil sands workers heading home to work at Wal-mart. This is simply not true, because the build-out of windmills, solar farms, geothermal wells and associated infrastructure would still require skilled labour.

Trucking companies that specialize in moving drilling rigs might dwindle, whereas transport companies capable of moving large windmill blades would be in demand. Pipe trades would still be required to retrofit existing oil infrastructure to handle natural gas or CO2. Electricians could see the largest boost to wages, and hence demand, as the infrastructure mix moves towards electricity and utilities.

These projects would also face the same constraints currently imposed on oil sands producers with respect to consultation, environment and property rights. Energy transmission projects would take the form of power lines in the place of pipelines, creating a new perceived threat to protesters and land owners. The same sort of NIMBY-ism that plagues current pipeline development would turn its sights on bird-slaughtering windmills and destruction of scenic vistas by power transmission projects.

Hydroelectric and Nuclear projects would increase in number in a carbon constrained world, and they would not be without their opponents. The construction of hydroelectric projects in BC has already obliterated thousands of hectares of forest, habitat and First Nations villages and hunting grounds. Increased demand for nuclear power would be good news for Saskatchewan, but these projects would not be palatable until the public has forgotten about Fukushima. Nevertheless, a carbon constraint would boost these types of projects and the profits of construction companies specializing in this field.

And let’s not forget the Farmers and Foresters. A carbon constraint might make for more biomass electric plants and biodiesel refineries. On one hand, this could drive up the price of food as grains and seeds become part of the energy mix. On the other, it creates alternate domestic markets for farmers. In BC, Cellulosic Ethanol could emerge as a source of demand for the thousands of hectares of standing bugwood decimated by beetles.

Hopefully the discussion so far has revealed that a constraint to a system will shift the equilibrium as the factors of production adapt to the new constraint. A low-carbon world would involve trade-offs, it would create new hazards, and would shift the investment mix towards alternate resources and energy sources. From an oilfield services perspective, it is a matter of adapting to the new mix of technologies. Each new green energy project still requires a supply chain of steel, cement, skilled workers, heavy equipment, transportation and supervision. Old technologies can be re-purposed and find new life in this scenario.

However, we should not view the 350ppm carbon constrained world as a cure-all for what ails us. Developing this infrastructure is not without its own set of hazards, negative environmental impacts and property rights issues:

Some days it seems that we are losing our critical thinking faculties and have given our power away to technocrats. These people state something that sounds smart, and the bandwagon effect ensues. Eventually the idea reaches a critical mass, and the consequences of the idea come to fruition. Maybe we should take these claims and think them through a little more before joining into the mass psychological shift. Sometimes the cure can be worse than the poison.

Propaganda does not deceive people; it merely helps them to deceive themselves.
– Eric Hoffer

Globe & Mail: Exxon Leads The Charge on The Carbon Bubble

Responsible Investor: Is the tide turning on ‘big carbon’? The surprising step change in the stranded assets debate.