Our company was founded on the following principle: everyone defines safety a little bit differently. People often ask us, what does “Xi” mean? Well, it’s deliberately ambiguous. But the way we like to define it is this way: X is a crossroads or intersection and the little i refers to the individual, industry, incorporated entity or injured party. Xi refers to someone who is at a crossroads, and faced with three choices: Business as usual, scrap safety altogether, or chart a new path.

Here is another way to define safety: go back to the first principles of the root words. What did this word originally mean?

Once we craft a philosophy of safety, we can begin to explore the fundamental laws that either enhance it or diminish it. The greek word for these laws is “nomos”.

The Greek term for “law”. It is the origin of the suffix -onomy, as in astronomy, economy, or taxonomy. (Greek: law, order, arrangement, systematized knowledge of [something]; usage. Nomos refers to the dispensation of justice, based on laws, whether natural, man-made or customary.

We recently trademarked the word “Safenomics” and the Canadian trademark office asked us to flesh it out a little bit more. Safenomics is the application of economic concepts to Health, Environment, Safety and Security under the banner of Loss Prevention.

Our position is that safety needs to be simplified. We don’t need all the bells and whistles, the new hot-dang silver bullet, or a bunch of paperwork to improve safety. SAFENomics can be thought along these lines:

Managing Risk to Prevent Loss to People, Planet and Progress.

Father Luca Pacioli is known as the “Father of Accounting”. He did not invent, but rather “codified” the system of debits, credits and ledgers used by traders in Venice to keep the economy rolling. His work formed the foundation of modern accounting and it continues to evolve from there. 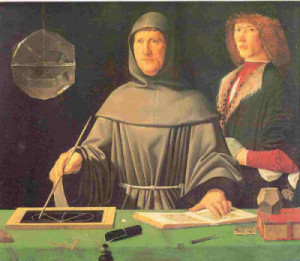 Have you ever wondered what the true cost of an incident is? For example, let’s say a crew of workers rolls their crew truck. The Safety manager gets a quote from the body shop for a $10,000 repair bill. But the costs don’t stop there. Here are some other costs to consider:

Administrative – cost to investigate the incident, to gather decision makers for meetings, report to client.

Non-productive time – Cost to source a new truck and have an employee drive it out to the site, the costs of phone calls with the repair and insurance companies.

3rd Party Costs – costs of property damage because the truck wrecked a bridge,

Opportunity costs – lost productivity because people were dealing with the incident, potential lost contracts because the Total Recordable Incident Frequency went above a certain threshold. Cost of lost productivity while workers were at the hospital to get a physician’s assessment.

WCB Claims Costs – one of the injured workers came back three days later with a sore neck, and now he needs to go for surgery to correct some spinal damage. Cost to WCB to send a private investigator to follow the worker and ensure he is not scamming the system. Cost of increased WCB premium rates and WCB claim.

Lost Time Incident Costs – The worker is staying home to heal, so we need to train his replacement and have the HR department hire another person.

The average WCB claim in oil and gas clocks in at $20,000. So it would seem that the total bill for this is $10,000 in truck repairs and $20,000 in WCB claims. However, these are the Direct Costs. The Indirect costs can be 5 times the amount of Direct costs, which would be:

These indirect costs will show up on the company’s balance sheet at year end. But not all companies track their costs and tie them to an incident. Now here is where it gets interesting. How much revenue does the company have to earn to break even on these incident costs?

If the company has a net revenue of 10%, it will have to earn:

This is why a single incident can absolutely cripple a company. It raises the company’s costs, which are passed on to the client through higher prices, schedule delays or the cost of re-work.

I’m sure you’ve heard that an ounce of prevention is worth a pound of cure. So how much money should the company invest into preventive measures, such as driver training, vetting driver’s abstracts, computerized vehicle monitoring, snow tires and such?

This is what we mean by Safenomics – tracking incident related costs within the organization and waking people up to the true cost of failing to invest in safety.

If you’ve got some thought on this, drop us an email at: